Agent -Sully- Sullivan is one of the top cops in the Imperial Bureau of Investigation. A veteran witch of the British Empire who isn’t afraid to use her magical skills to crack a case. But Sully might need more than a good education and raw power to stop the string of grisly murders that have been springing up across the American Colonies. Every one of them marked by the same chilling calling card, a warning in the form of a legion of voices screaming out through the killers’ mouths: -It IS tHe YEAr oF the KNife.-

Sully’s investigation will drag her away from the comforts of home in New Amsterdam, the beautiful but useless hyacinth macaw that used to be her boss, and the loving arms of her undead girlfriend, in a thrilling race against time, demonic forces and a shadowy conspiracy that will do anything to keep its hold on power and ensure that Sully takes their secrets to her grave, as soon as possible.

G.D. Penman’s imaginative The Year of the Knife is a fun, fast-paced urban fantasy mystery with an engaging set of characters, most notably Agent Sully of the Imperial Bureau of Investigation.

Sully is a powerful witch that works for the IBI (Imperial Bureau of investigation) for the British Empire. It is her job to deal with the worst paranormal attacks in the American colonies. When a string of mass murders continues to happen, it is up to Sully find and stop the killer. But soon Sully realizes she may be dealing with someone with magic never seen before. Can Sully crack the case before it is too late?
I devoured this book, it was full of so many different paranormals which I loved. Witches, vamps, skin walkers, demons, it was a great mix and they fit into this world in ways you would not expect. For one, vampires are considered very lowly. They are banished, killed, hunted and at best ignored, pending what part of the world you are in. Humans know they are living with things that go bump in the night but the witches and other magic users keep them in line. I really got immersed in this world and thought it was well done. I don’t remember ever quite reading a book like this before, and considering all the paranormal books I have read, I’m pretty impressed.
Sully has to be the biggest badass witch I have ever read about. I just loved her character. She is awesomely powerful but she is not invincible. I liked that even with all her power, her life was still on the line, it made the story more exciting. I am not going to give anything more away, but I would love a sequel please Mr Penman. This has so many different elements in this story, that I think will appeal to a lot of readers. 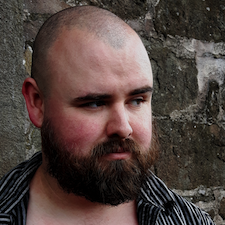 G D Penman writes Speculative Fiction. He lives in Scotland with his partner and children, some of whom are human. He is a firm believer in the axiom that any story is made better by dragons. His beard has won an award. If you have ever read a story with Kaiju and queer people, it was probably one of his. In those few precious moments that he isn’t parenting or writing he likes to watch cartoons, play video and tabletop games, read more books than are entirely feasible and continue his quest to eat the flesh of every living species.