EVERYTHING UNDER THE SUN BY JESSICA REDMERSKI

Thais Fenwick was eleven-years-old when civilization fell, devastated by a virus that killed off the majority of the world’s population. For seven years, Thais and her family lived in a community of survivors deep in the heart of the Appalachian Mountains. But when her town is attacked by raiders, she and her blind sister are taken away to the East-Central Territory where she is destined to live the cruel and unjust kind of life her late mother warned her about.

Atticus Hunt is a troubled soldier in Lexington City who has spent the past seven years trying to conform to the vicious nature of men in a post-apocalyptic society. He knows that in order to survive, he must abandon his morals and his conscience and become like those he is surrounded by. But when he meets Thais, morals and conscience win out over conformity, and he risks his rank and his life to help her. They escape the city and set out together on a long and perilous journey to find safety in Shreveport, Louisiana.

Struggling to survive in a world without electricity, food, shelter, and clean water, Atticus and Thais shed their fear of growing too close, and they fall hopelessly in love. But can love survive in such dark times, or is it fated to die with them?

The first thing I have to say before I start writing my review. I am waiting for me to stop my tears even though the book it finished on promising note.
This is a long but addictive read about what happens after the crash of civilisation. When we meet Thais its seven years after the fall, she lives with her father and her sister Sosie. They appear to be surviving until her father is killed and the sisters are captured and sent to Lexington where civilisation has devolved to an alarming degree.
It’s in Lexington is where she meets Atticus and they escape and start their journey to Shreveport where it’s a good and fair place to live. Lexington was worse than the old west.
The things made this such a good book is how realistic everything felt and unfortunately it rang too true.
How far would you go to survive and how it changes you on the inside if you let it. Atticus struggled everyday with what he had to do, and it was Thais that kept him going. Sometimes people are made stronger and learn to survive.
This is Atticus and Thais journey to civilisation, and a long and arduous journey, where meet a lot of different people some good and some bad. It was how they both changed into good and strong people who can survive in this new world. I loved this book every page of it. Be prepared for your emotions be very involved and get tissues ready. 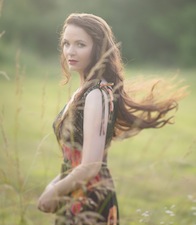 She also writes as J.A. Redmerski.

GIVEAWAY!( US/CAN )
• 5x signed copies of Everything Under The Sun + bookmarks and post cards
a Rafflecopter giveaway

thechroniclesofamina.art.blog
Much Ado about Books