The first in a brand new urban fantasy series where gods roam and mortals fight, STORM OF THE GODS follows two brothers who are caught in a conspiracy revolving around ancient artifacts, and find themselves siding with their supposed enemies rather than the Olympian who demands their loyalty…

Thirty years ago, the gods of Greek legend returned to the world. Their return restored their powers, which had been spent in a cataclysmic battle with the Titans. With the ancient deities imprisoned in Tartarus, the Olympians now reside in Néo Vasíleio, formerly known as California.

Twenty-four-year-old Derek Aerios is a war scion, a descendent of Ares, the God of War. He and his brother, eighteen-year-old Liam, capture mythological creatures and rogue scions as part of Ares’s elite military force. As he struggles to cope with his violent powers and the scars of a traumatic childhood, Derek tries to keep the two vows he has made: protect his brother, and never kill a human again.

But when Ares forces him to hunt and kill four rogue scions under Athena’s control—by threatening Liam’s life—Derek chooses to go after the scions in order to save his brother and keep his promise to himself.

Yet the closer Derek gets to the scions, the more he realizes that his orders are part of a deeper conspiracy that put him at odds with his mission and his conscience. Athena may not be the enemy, a traitor could be in their midst, and the Titans could be closer to freedom than ever before.

This is an action packed start to a new urban fantasy Series. I will say quickly this an adult series, as some of the situations and violence is quite extreme, but totally in proportion when dealing The Olympians, especially Ares who happen to be Derek and Liam’s boss. As they have his diluted bloodline It entitles him to treat them worse them slaves.
I loved the brothers Derek and Liam and how they stick together. Derek is very protective of those he cares about. This is a fascinating read Amy Braun gives you a handy prefix to go through their elements. So if your mythology is a big rusty this is a good reminder. As we meet Scions from different gods it’s a helpful reminder.
As this is book one there is the world building, but don’t worry it still has plenty of  action. I enjoyed reading this a lot and devoured in one go. Now I’m waiting for book two.

Amy is a Canadian urban fantasy and horror author. Her work revolves around monsters, magic, mythology, and mayhem. She started writing in her early teens, and never stopped. She loves building unique worlds filled with fun characters and intense action.

GIVEAWAY!
• A signed copy of Storm of the Gods, a printed color map + swag
a Rafflecopter giveaway 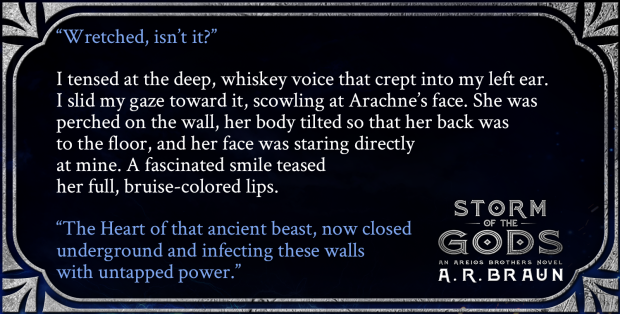 ☾ For your mind and soul