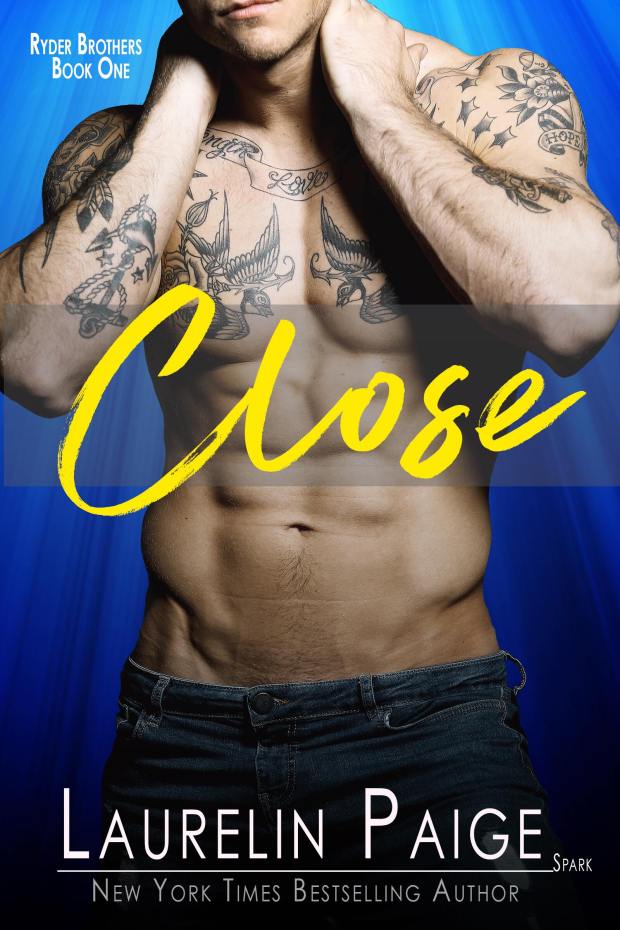 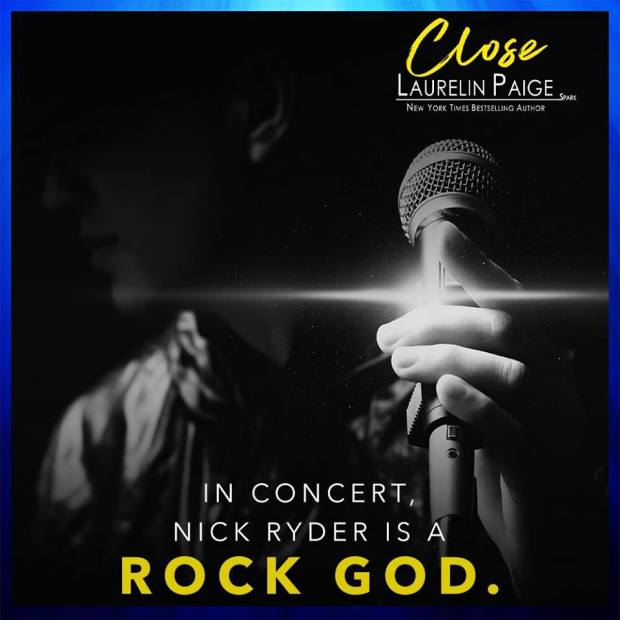 Everyone wants to get close to a rock star.

Those talented fingers strumming… a guitar.

Everyone wants to bang a rock star.

So why do I keep running from the one who wants me?

I have a reputation.

He’s every flavor of bad.

And he’s much, much too young for me.

If I end up in Nick Ryder’s bed, my career and I will both be screwed.

…but that’s only if I’m caught.

“Hi,” he says, doing a double-take when he realizes it’s me. He looks fabulous, of course, because why wouldn’t he when I look so scrubby? He’s wearing jeans and a T-shirt and a hoodie, and his face doesn’t look like he’s tired, or like he stayed up late to drink too much and tear up the dance floor.

Or like he spent last night making out with somebody more than a decade older than him.

“It’s crazy seeing you here,” I say. I giggle again at the sheer ridiculousness of this. “Do you come here often?” What am I doing? What am I saying? It’s like I just learned how to talk to people of the opposite sex. How have I ever gotten a date?

Not that I’m trying to date Nick.

“Occasionally. You?” He sticks his hands in his pockets and he’s so relaxed, so sexy, and I just can’t stand all that swagger on such a handsome guy that I am not allowed to touch. It’s unfair for anyone to look so effortlessly edible before nine a.m.

“It’s my favorite shop. Come here all the time.” I take a couple steps backwards, trying to shift toward my car. “I probably should—”

“Don’t you think it’s probably more than a coincidence?” He takes a step towards me, and I take one back, willing myself not to respond to the rumble of his deep voice and the magnetism of his body. “That we’d see each other again so soon. Kind of like fate, almost.”

Oh my god, Oh my god, he’s flirting with me. What do I do? He’s so hot, I can’t even look at him. But then I do, and I have total church-giggles over this, and I have to escape before I make an even bigger fool out of myself. Someone is bound to notice that I am losing my cool, and they’ll draw conclusions that aren’t even true.

It was just kissing!

“It’s really weird, I have to admit.” I dance back some more, then glance behind me to make sure I’m not going to back into the street and get run over and make this even worse. “And really awkward.” I brush some hair back that’s come loose from the messy bun at the base of my neck.

He shrugs, seeming to disagree. And it’s true that I’m the only one who seems to be awkward right now. “I don’t know about that. Doesn’t have to be awkward. Could just be convenient. Since I never got your phone number.”

If I didn’t think he was flirting before, I know he definitely is now. I don’t want to say no to him, but I have to say no to him. He cannot have my number. Can’t have anything more than a memory of a scorching-hot make-out in the back of a club. What we did was not for a sunlit day. It was for a dark corner. And yet, I still can’t seem to actually say the word no. So instead I say, “Why do you need my phone number?”

Oh my god, this is mortifying. It really is like I’m in high school again and I’ve forgotten not only how to talk to boys but how to stand in their presence.

He takes another step toward me, laughing. “Well, for one thing, I thought it might be nice if we had dinner sometime.”

He has the most ridiculous smile, I realize. It lights up his entire face. You can see it in his eyes, and there’s no pretension. It’s all genuine. Pure sunshine. I’m rendered speechless by it for half a second and I have to ask, “What was that?”

“Dinner,” he says, that huge-ass grin in full force, taking another step toward me, and now there’s only three feet between us, and I can feel the body heat from him, can remember what it felt like the last time he walked me backwards into a wall and then his body was pressing into me, and his mouth was on me. When his chest was against me, when his cock was pressing into me and my hips—

I suddenly jump backwards. “I don’t think that would be a good idea.” I look around suddenly to see if anyone’s noticed this exchange yet.

“What are you worried about, Natalia?” He doesn’t chase after me, just stands there looking confident and laid-back. Like a man trying to tempt a scared animal out from hiding. “I mean—I do bite, but most women like it.”

I smile at that, because I can’t help it, but I duck so he doesn’t see.

He’s probably so much more experienced than me.

He’s probably so dirty in the bedroom.

God, I shouldn’t be thinking about that. “I shouldn’t even be talking to you,” I say, shaking my head. I turn toward my car.

“No, you shouldn’t be,” he calls from behind me, and I have to actually close my eyes to collect myself because it’s obvious he’s thinking about doing not-talking things. Things like last night. Things like biting.

Things good girls have no business being so turned on by.

I tell myself he probably says stuff like that to all the girls who walk away from him.

But who am I kidding? Who has ever walked away from Nick Ryder? Besides me, I mean. Twice now. I deserve an Oscar for my willpower. That should be a new category.

Then I step into my car, put my keys in the ignition and drive away before I lose my senses and change my mind.

This is one hot sexy loving romance between Natalia Lowens and Nick Ryder,
After a bad break-up Natalia who is at the top of her career, but her personal life feels empty. Natalia and two girlfriends goes to a nightclub to cheer up. Natalia know that no paparazzi are allowed in and because everyone is famous you know there will be no pics showing up on social media to embarrass her.
So after all the stress Natalia goes on to the dance floor and loosing herself in the music. While relaxing into the music she finds herself in tune with a guy, so much that they keep on getting closer and dance like they have practiced for months with each other in secret.
That’s how Nat and Nick meet and they start seeing each other in secret. Natalia know that if it gets out about the affair it would be a scandal because she is 10 years older. Nat wants to settle and have children. Nick being 23 is at a different stage in his life.
Nick is a great guy, but he had to grow up quickly has fallen for Nat and he is in love and is determined to show Nat that she loves him and he wants the same things she does.
A really enjoyable romance I loved Nick but wanted to shake Nat. This is a Hot and Sexy but my god Nick is so loving and patient. Helping Natalia to work through her fears. This was a wonderful and romantic story, and lets just say I would take Nick home and keep him.

With over 1 million books sold, Laurelin Paige is the NY Times, Wall Street Journal, and USA Today Bestselling Author of the Fixed Trilogy. She’s a sucker for a good romance and gets giddy anytime there’s kissing, much to the embarrassment of her three daughters. Her husband doesn’t seem to complain, however. When she isn’t reading or writing sexy stories, she’s probably singing, watching Game of Thrones and the Walking Dead, or dreaming of Michael Fassbender. She’s also a proud member of Mensa International though she doesn’t do anything with the organization except use it as material for her bio.

These Grade-A Beefcakes are sizzling hot!
Sir Loin of Beef by Vanessa Vale is available NOW!

They might call me Sir Loin of Beef, but when I see Kaitlyn for the first time, stick a fork in me, I’m done. But I won’t claim her alone. Jed Cassidy and I share everything, and that includes her. If the sweet little librarian isn’t ready to be wrangled by two rodeo champs, we’ll just have to break her in nice and slow. She’s ours. We will win her over—body and soul—and when we do? Well, let’s just say we’ll give her a hard ride…and it’ll last a hell of a lot longer than eight seconds.Kaitlyn Leary takes one look at the sexy cowboys and can’t remember the last time she was so eager for a double helping of… big beef. But giving in to desire might ruin everything. Because the truth is that this small town librarian isn’t all she seems. Landon Duke and Jed might be talking about a future of picket fences and making babies, but the past could destroy it all. Still…two cowboys?

Remember: With a Vanessa Vale book, one cowboy is never enough. In this smokin’ hot new series, each heroine gets an extra helping (or two) of Grade-A Beefcake.

Sir Loin of Beef is the first in a new series by Vanessa Vale, and Sir Loin of Beef is a nickname Landan Duke was given when he was on the rodeo circuit. Now retired and back in his home town, Duke and Jed are searching for the one women that will be their forever woman.
Kaitlyn Leary is attending a Ladies night with her friend Ava. Coming straight from work and still in her more formal clothes. Ava is super attractive but Jed and Landon are both staring at Kaitlyn, so they try to find out more about her.
Well the rest is the fun in the claiming of the town’s librarian by Sir Loin and Jed and the ups and downs until their Happily Ever After. A quick read with lots of fun from our first Grade A Beefcake. A Fun and fast read with lots of naughty with a fun librarian. You know what to expect from a Vanessa Vale Cowboy book and this had it all. It certainly put a big smile on my face.

Vanessa Vale is the USA Today Bestselling author of over 30 books, sexy romance novels, including her popular Bridgewater historical romance series and hot contemporary romances featuring unapologetic bad boys who don’t just fall in love, they fall hard. When she’s not writing, Vanessa savors the insanity of raising two boys, is figuring out how many meals she can make with a pressure cooker, and teaches a pretty mean karate class. While she’s not as skilled at social media as her kids, she loves to interact with readers.

☾ For your mind and soul