About A HERITAGE OF DEATH

An unconventional woman. A brutal murder. To solve the case, one woman will look for help from beyond the grave…

Cici Gurule wants to pretend her dream is nothing more than a meaningless nightmare. But the bruised and bloodied woman looked alarmingly like her. When a baby turns up on her porch–a baby who was reported missing days before–evidence points to a connection with the woman in Cici’s dream, and she can no longer ignore the nighttime vision. Cici and Detective Sam Chastain struggle to follow the garbled evidence, but the killer scores his victim first. Worse, a message pinned to the victim’s blouse states, “You’re next.”

Now, it’s a race against the clock to keep the baby safe and find the murderer before his trail goes cold. Cici’s only chance to solve this mystery, before she becomes the next victim, means choosing between her faith and believing a message left by her ghostly twin.

A Heritage of Death is the second novel in a compelling female sleuth mystery series for fans of Ruth Ware and Gilly MacMillan. If you like convention-shattering heroines, vivid Southwest settings, and a touch of the paranormal, then you’ll love Alexa Padgett’s twisty mystery.

Buy A Heritage of Death and hold on tight for a white-knuckle thrill ride today!

Add A HERITAGE OF DEATH to your Goodreads list here!

Get your hands on A HERITAGE OF DEATH now! 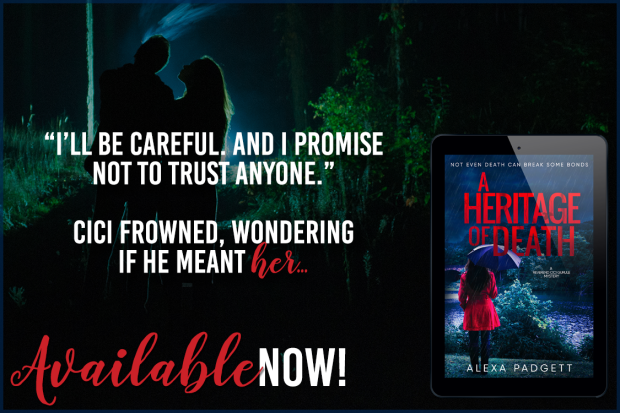 I have to say I think this book is better the last one, and I thought that was fantastic. We catch up with Cici after she have some disturbing dreams, that seem so real. When she hears her twin’s voice and realizes she is trying to tell something. If you have read the last book you will what happens when Cici starts having visions that begin to come true.
Sam is there supporting Cici as usual as this Harley riding reverend does things her way. This for me was just up my street following the clues with Sam as he has a head start because of Cici’s visions. A great new character sleuth that I for one is quite happy to follow the adventures of Reverend Cici Gurule with hopefully Sam by her side. I so pleased to find a series that has blown me away, this was just perfect. 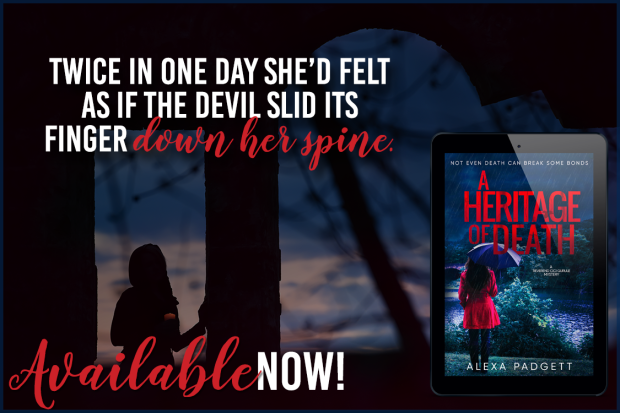 Missed A PILGRIMAGE TO DEATH and want to catch up?

When Cici discovers a body in the forest, she’s shocked to realize the victim’s wounds are identical to the ones that killed her sister a year ago. Now she’s embroiled in the takedown of a massive criminal operation, and the stakes couldn’t be higher…

Someone murdered her sister. And shot her dog. The killer won’t stop until she’s dead, too.

Cici finds a dead body while hiking in the Santa Fe National Forest. The situation deteriorates when she discovers the victim bears similar stab wounds to those that ended her twin sister’s life a year ago.

Then, her identical twin sister infiltrates her dreams.

All of a sudden, Cici and her dogs must dodge arrows, bullets, and even a demon truck—all while she grapples with the knowledge that her sister was on the trail of a deep-rooted criminal operation. Worse, her twin’s death was much more sinister than a random act of violence.

Now, as she follows the clues her sister drops in her dreams, the criminals want Cici out of the way. Permanently.

Add A PILGRIMAGE OF DEATH to your Goodreads list here!

Get your copy of A PILGRIMAGE OF DEATH now!

With a degree in international marketing and a varied career path that includes content management for a web firm, marketing direction for a high-profile sports agency, and a two-year stint with a renowned literary agency, award-winning author Alexa Padgett has returned to her first love: writing fiction.

Alexa spent a good part of her youth traveling. From Budapest to Belize, Calgary to Coober Pedy, she soaked in the myriad smells, sounds, and feels of these gorgeous places, wishing she could live in them all—at least for a while. And she does in her books.

She lives in New Mexico with her husband, children, and walk-loving Great Pyrenees pup, Ash. When not writing, schlepping, or volunteering, she can be found in her tiny kitchen, channeling her inner Barefoot Contessa.

The Princess’s Duty (Of Fire and Frost #1), an all-new Dark Fae Romance by Sloane Murphy is NOW LIVE!

Emilia Daarke has wanted to escape the Summer Court her entire life. She’s not brutal like the other Fae. She’s not savage. But they are.

When the boy she loves, Cade Vasara, Crowned Prince of the Winter Court, kills Emilia’s twin, they are torn apart and Emilia’s love for Cade dies just like her sibling did.

Years later, she has fallen in love with a Hunter – a forbidden love that goes against all that she has been taught. A man her father will never approve of. When her secret is outed, her father captures her Hunter and gives Emilia an ultimatum.

If she succeeds, she’ll lose the one she loves. But if she fails, he will die, and she will never be able to forgive herself…

What a great start to a new series, in book one we follow Emilia a princess of the Summer Court. Emilia’s life is unbearable after her twin gets killed after the King of the Winter Court encourages the darkness inside him, and Cade kills him to save his younger brother Rowan’s life. Emilia thought the entertainment at the Winter court was bad, but that his nothing compared to the way her parents start to behave after her twin’s death. Emilia has wanted no part in the blood sports that her father thought was entertainment.
To escape the Court, she begins to see one of the Hunters Oberon and they plan to escape somewhere peaceful and away from the war and bloodshed. Only this is just the beginning  after witnessing things that she couldn’t imagine. Emilia will never trust anyone ever again. This book has everything you would expect from a book about the Dark Fae, it kept me on gripped from beginning until the end and now I can’t wait for book two. Emilia is a strong woman even though among her own she is considered weak. It very hard to do this book justice without spoilers, but I am addicted and an on edge until I read the next book. This book is only suitable for 18+

My name is Sloane, but people call me a variety of names, particularly after they read my books. If you’ve read them, I’m sure you can use your imagination to work them out. I was born in England and have lived in small towns and cities ever since.

My husband, Chris, is the most supportive person in my life. Without his love, help and patience I wouldn’t be where I am today. Living my dreams, with him by my side and our crazy fur baby creating chaos.

At school I drifted through, achieving average grades. I fell into administration and sales jobs, thinking that I couldn’t really do anything else, despite always wanting more.

I’d been writing poetry and song lyrics since the age of about 11, but my love of reading has always been strong. In 2012, I got my first kindle and discovered the works of Samantha Young, Addison Moore, Amanda Hocking, Tijan, A.E Murphy and many many more.

In 2015 I stumbled into the indie world by accident. I emailed a certain indie author after falling head over heels for her books, and she became one of the best friends I will ever have. She’s a gladiator! But she pulled me in, and took me to my first book signing. She encouraged me to start my blog. She encouraged me to put my art out into the world, first with teasers & covers.

Then when I finally told her about my stories, she encouraged me to put them out there. Between her and the one I love the most – thank you, Lauren Rowe – (my twinnie, and my best friend) I found the confidence to put myself out there, and the rest, as they say, is history.